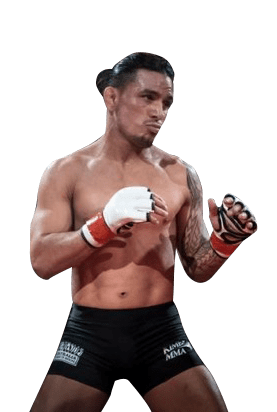 Charlie “El Guerrero” Alaniz burst onto the Hex scene with an impressive rear naked choke victory over the very experienced, Shantaram Maharaj in December of 2014. Alaniz hails from California, and spends the majority of his time down under training under the tutelage of revered MMA coach, Ed Bavelock. This ferocious competitor has finished seven of his eleven professional victories, including three KO’s and four submissions. With an impressively well-rounded skill set and a killer instinct to match, Alaniz was selected by the UFC to represent Hex Fight Series on The Ultimate Fighter Season 24 (Tournament of Champions). After his stint on the show, the talented American warrior returned to Hex Fight Series to defend his title against Hiroki Yamashita in what was one of the greatest fights inside the Hex cage to date.